Consultations in Barcelona one week a month

From now on, you can book an appointment though our agenda or leave us a message about any other request.

I have borrowed this headline from the ``Société des ostéopathes de l'Ouest`` (France) that had organized a congress I attended about this subject. After three days of quite interesting debates the question “What is osteopathy?” was still open so as to respect A.T Still’s wish to see osteopathy in never-ending evolution.

With the above mentioned, I want to point out that it’s quite useless to try to sum up what osteopathy is in a few lines on a website or on a blog. And yet I am going to do my best to share with you the founding ideas around which it was built. I do hope I will not betray AT Still’s thought.

The human being is made of functional units which represent a whole. For example a cell is a functional unit that breathes and feeds, breaks down nutrients, evacuates them like all the cells around them which are going to make a tissue which in its turn, will become a functional unit. The latter will fit in an organ, a bone and will make another functional unit still connected to the previous ones and which will fit in another functional unit and so on…
If one of the cells malsfunctions, it may disrupt the neighbouring ones, disturbing as well the local environment then the regional one, and even more distant functional units. But as all these cells are interconnected, some other cells can rescue the failing unit. It means that your body is able to self-heal and to adapt (for example when you cut yourself, your blood coagulate, when you are wounded, the tissue heals spontaneously). Sometimes these self-healing powers may be exceeded, that’s where osteopathy plays a role. A T Still who has never mentioned this self-healing faculty, spoke instead of Nature and insisted on the fact that it’s Nature that heals all wounds, the osteopath is just here to help it express itself anew.
So the structure (anatomy) and the function (physiology) are two functional units which are closely linked and inseparable. A T Still said that “Osteopathy is this science which helps the body to restore its normal balance between anatomy and physiology.
Any dysfunction of the musculoskeletal framework will then create a disruption of the physiology either locally or in the distance impairing “Health”, that is to say the self-healing powers.
The osteopath will then try to understand where these two units are no longer interconnected, losing their capacity of working together harmoniously and hence opening the doors to disease. He will try to know the true reason of this disconnection by carrying out a gentle hands-on examination in order to determine the area of the biggest dysfunction. Thanks to this examination, he will then decide which technique is the most appropriate to re-establish the self-healing powers, locally and globally. The functional units will then have a good blood fluidic flow, a good nerve function and a normal mobility.

When teaching, A.T Still said that “harmony is where obstructions don’t exist”.
Osteopathy tries to give back to the body its self-healing powers rather than treating a symptom. As for the symptom, A.t Still said “treating a symptom would be as strange for an osteopath as for a firefightet would be taking care of the smoke rather than putting out the fire that causes it.”

The course of a visit to an osteopath

Most osteopaths will start the session by asking you questions to know which types of diseases you may have got, if you have medical treatments at the moment, the surgeries you may have undergone and if you have also suffered from traumas. All these questions are meant to eliminate all the pathologies that osteopathy can’t treat (cancer, multiple sclerosis…)

Then the osteopath will start a gentle hands-on examination, performing some tests which will enable him to spot the areas whose mobility is not dysfunctional. According to the results of these tests, he will then decide which areas he has to treat as a priority.
The osteopath can use different tools to get self-healing capacities back to your body, from structural mobilizing joints (those which make a soft noise which can be compared to the one you get when you crack your knuckles) going through functional mobilization, working on fascia, on joints, cranial working, fluidic working, visceral working and so on…
Most of the time, you will be asked to remove some outer clothing even if you come to see him for a migraine. Indeed whatever the symptom, the osteopath will carry out a complete examination since your head may not be the cause of your migraine. It’s Nature that works and Nature often needs time.
Your osteopath will then explain to you that some days will be necessary to feel better and for the same reason he will tell you that it is no use having a lot of sessions, it is wiser to wait between 3 or 4 weeks between 2 sessions. He will maybe explain to you as well that there may be some reactions. Indeed you may be tired or stiff.

Who can see an osteopath and why?

Ther is no age limit when consulting an osteopath. In some maternity wards we can see some babies just after they were born if their birth was a bit difficult and I even the eldest of my patients at some point was a centenaire lady.

We treat the malfunctions of tissue that impair the physiological functions and disturb the self-healing capacities.
Most of the time patients come to see us because they suffer from musculoskeletal pains either traumatic ones or emotional ones (the questions at the beginning of the examination will have eliminated all the pains from organic origin like tumors, metastases…) all the problems that refer to ENT (rhinitis, frequent ear infections..) anxiety, irritability, sleep disturbances, headaches, migraines, gripes and sleep disturbances for infants. Of course this list is not exhaustive.

I am graduated from the Collège Ostéopathique Européen (France). I have exclusively practised osteopathy since 1991. Since that date I have always carried out postgraduate studies in order to improve my practice. I followed some training in Biodynamic Osteopathy for many years, I have also pursued training periods to treat infants. For several years now I have studied in the Association d’Études et de Recherche en Ostéopathie. In 2002, when osteopathy was accepted as a therapy in France, I could get my Adeli number which allows me to bear the title of osteopath.

I am a member of UFOF  ( Union Fédérale des Ostéopathes de France ) which fought for osteopathy to be be officially recognized in France and for a high quality teaching.

As I am writing these words, the UFOF has just won a great victory by getting new texts to be graduated as an osteopath after five-year studies following the high school diploma, which represents 4860 hours of training from which 1500 will be spent in clinical practice.

I was invited to come and work in Barcelona within Col.legi de Teatre de Barcelona  by some friends of mine who are comedians, producers and drama teachers. I was fascinated by this city and little by little I felt like coming to work there regularly. I am glad to be able to welcome you today in my second osteopathy practice.

Since 2016 I volunteer with docOSTEOcam NGO, of which I perform as vice-president since 2018.This NGO offers Osteopathic care for disadvantaged children in Cambodia (orphans, abandoned or abused children). We work in Cambodia two yearly seasons, one during Spring and the other in Fall. For further information on this NGO: docOSTEOcam. 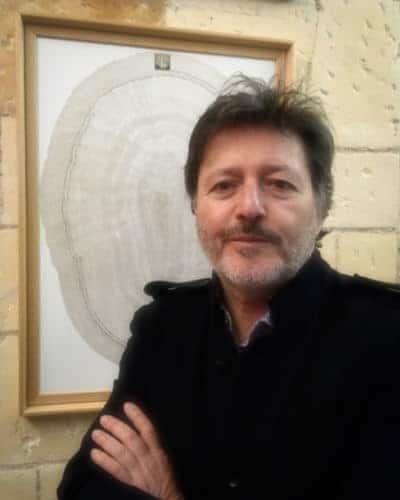 Nature does its work but sometimes it’s better to help it.

Ther are many healthy practices such as yoga or meditation, taïchi… As for me I tend to advise those I practise since they have really helped me either in my professional or private life. I mean Aikido and Aiki-Shin-Taiso ( KRH ).
In Barcelona you will have the possibility to practise at Ume no Dojo.

Lessons for adults and children over 13 years
Viladomat 76, Sant Antoni

For any question or specific request

If you wish to receive regular information on weeks of consultation in our Barcelona office.